For the past fews years, I’ve participated in Hacktoberfest by at least getting one or more PRs in for the month of October. In prior years, I would find the easiest way possible to contribute for a quick PR and didn’t put a lot of thought into solving a real issue. The PRs that I submitted were things like adding a name to a directory repo or adding a picture of my pug to a dog API. I decided to give myself more of a challenge this year and submit PRs that took more effort. Here’s a list of the PRs I submitted and what I learned: 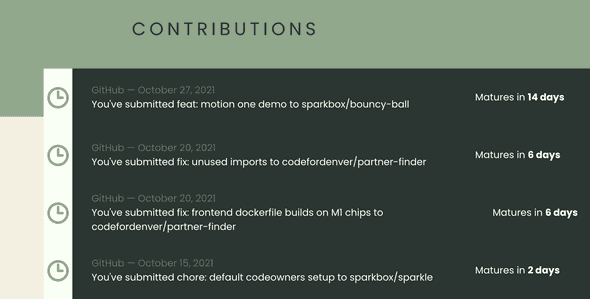 Add a code owners file
The code owners file shows you who is responsible for code in the project and will require PR reviews from those owners. I already knew about this file from a prior project but it was my first time setting it up. This was my easiest PR!

Update Docker Build for machines with M1 chips
I looked around Github for Hacktoberfest issues and stumbled upon this repo for the Code for Denver Partner Finder. When attempting to work on the issue below, I realized that the project wasn’t building correctly. After some digging around, I found that Docker builds differently on machines with M1 chips. This took me longer than expected to figure out and it was definitely an earned PR.

Remove unused imports
This was the original issue that I wanted to work on. I learned how to set up the eslint-plugin-unused-imports package and removed a few unused imports from this project. I can now take this new-found knowledge and apply it to existing projects.

Motion One Bouncy Ball demo
The Bouncy Ball project had an issue open for adding a Motion One example. Motion One is a newer animation library that’s built on the Web Animations API. It’s smaller and faster than a lot of other animation libaries. It did take some tinkering with the direction, y, and ease values to get the animation to look like the other bouncy ball examples. I really enjoyed working on this one and it was the only visual frontend contribution out of the four.

See you next year, Hacktoberfest.

Written by Anastasia Lanz who lives and works in Laramie, Wyoming. You should follow her on Twitter